It ends a two-year British reign at the top, according to an annual survey of global real-estate investors from property-broker CBRE, and is the latest sign that the U.K. real estate market is losing its shine. About 17% of investors picked Germany as the region’s top country for property investing. This compared with around 15% for the U.K., which attracted 31% of the vote last year, CBRE said. 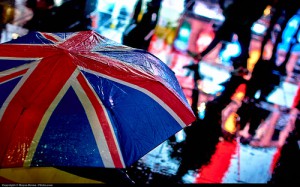 Photo by Moyan Brenn / CC BY

For the U.K. the shift is based on weaker economic growth prospects, caution ahead of Britain’s upcoming vote over its future in the European Union and years of booming property values. Germany landed the top spot in part because investors are increasingly looking more widely across the region, CBRE said. The rise in sentiment toward central and eastern Europe was particularly sharp. Investors’ search for yield may be part of the explanation,” the report said.

The dip in sentiment follows years of surging demand for U.K. property, which has been at the forefront of a global real-estate boom. The sector is perceived as a safe-haven from financial shocks, while returns have looked attractive compared with other assets like bonds. The U.K., and especially London, rose to the top of investors’ wish lists during the boom as the economic recovery took hold. For investors from Asia and the Mideast starting to venture outside their own regions, central London was often a first port of call. Last year a new record for U.K. real-estate investment volumes of GBP65.8 billion ($93.11 billion) was set, according to data-provider Real Capital Analytics. London accounted for over half of the total. But the pace of investments slowed in the second half of last year, declining 18% from the same period in 2014, according to CBRE.

Foreign investors have been retreating amid weak oil prices and growing uncertainty over the global economy. Britain’s vote in June over its EU membership is expected to further temper investment. In a February survey from CBRE, nearly three-quarters of respondents said a U.K. exit from the EU would make the country a less attractive place to invest.

“There is a general level of uncertainty, which is probably hovering over the market,” said Chris Brett, head of international capital markets U.K. at CBRE. Global economic weakness was judged to be the greatest threat to property markets in 2016, followed by domestic economic problems. The Organization for Economic Cooperation and Development last week said economic growth is set to ease in many major global economies, including the U.K., U.S. and Germany.